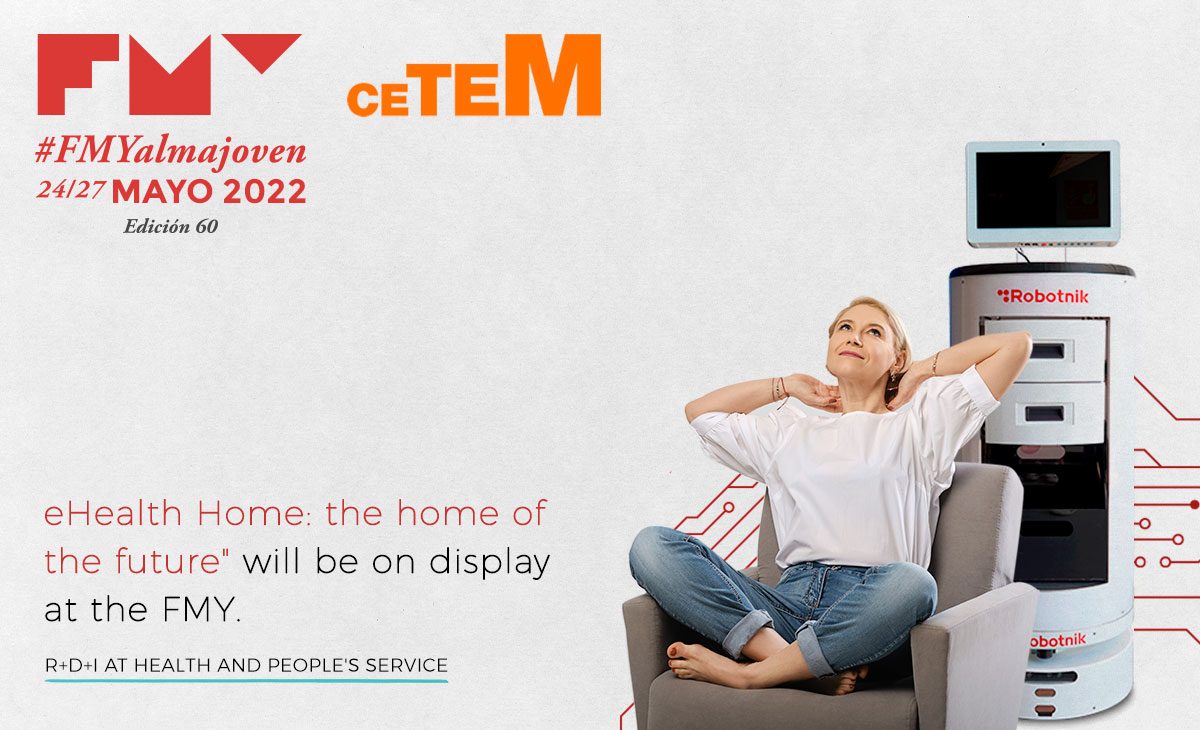 “eHealth Home: the home of the future” will be on display at the FMY showcasing advanced technology innovations.

CETEM’s stand will feature an assistance robot and several sensors in order to prove that innovation in healthcare is already possible.

We will be able to discover how advanced technology allows the habitat sector to focus on personal care as part of the presentation of “eHealth Home: the home of the future”, by the Furniture and Timber Technology Centre of the Region of Murcia (Centro Tecnológico del Mueble y la Madera de la Región de Murcia – CETEM).

The 60th edition of the Yecla Furniture Fair (FMY) will showcase, from 24 to 27 May, some of the technological advances that increasingly enable the habitat sector to focus on people’ s care. As a result of the cooperation between the event and the CETEM, visitors will be able to see first-hand how these advances will not only improve people’s lives, but also help to prevent pathologies.

In particular, visitors to the FMY exhibition centre will be able to see for themselves how a healthcare home works at the CETEM stand: “eHealth Home: the home of the future“. Incorporating technology in furniture helps to monitor habits and detect behaviours that could lead to the development of cardiovascular pathologies in the future.

In this way, the FMY event has once again become a showplace for the latest technological innovations. Developments that highlight how the habitat sector is currently turning its attention to R&D&I. Health care and healthy and active aging, one of the major challenges set by European development strategies, constitute the focus of this sector’s attention.

“There will come a time when, when we buy a chair, a bed, a table or other elements of our home, we will have two options: to buy that piece of furniture, and the possibility of this element being digitalised so that it can detect our habits and thus protect our health”, explains José Francisco Puche, director of the CETEM.

For example, in the Region of Murcia, furniture digitisation promoted by the technology centre focuses on detecting cardiovascular problems. “…as it has been found to be the most common health problem in the older population,” says Puche. Among the causes of this type of pathology “are lifestyle habits and, in particular, diet”. The project’s aim is “to achieve the digitalisation of homes to ensure healthy aging”.

R+D+I AT HEALTH AND PEOPLE’S SERVICE

preventive health in which several agents are participating in order to achieve this milestone. The CETEM initiative is part of the ambitious Pharaon Project, currently being developed as a trial project in Murcia and Andalusia within Spain. It is also being developed in Portugal, Holland, Slovenia and Italy at a European level. In addition to CETEM, participation in the Region of Murcia accounts the Murcia Health Service (SMS), the Polytechnic University of Cartagena (UPCT), MIWenergía, an energy management company, and companies of great technological value such as Indra Sistemas.

Puche believes that projects such as ‘Pharaon’ demonstrate that every technological development, the so-called R+D+i, is “at people’s service”. “Habitat’s digitalisation is entirely directed at people’ s care and preventive health. Especially in that group of people who, as they grow older, tend to experience some health problems”.

In short, the idea is to create homes and living spaces in which people can live and age properly. In this sense, the exhibitor firms at FMY are already sending their products to senior citizen centres, hospitals and nursing homes. According to the director of the CETEM, José Francisco Puche, they want companies within the sector “to adopt this technology to prevent health problems”.

Focusing on preventive medicine “not only prevents the development of these diseases, but also reduces the cost that this generates for the public health system,” says Puche. He also confirms the interest that the project has aroused in the healthcare sector. In fact, CETEM is already installing this technological equipment in 75 homes as part of a pilot project and it is starting to be used in several nursing homes.

Besides reducing costs for the health system, such prevention leads to sustainability. “If we are able to detect high heating levels in winter, in addition to be able to regulate usage, we will be able to detect the reasons for this behaviour”, remarks the director of the CETEM.

THE RB1-BASE, AN ASSISTANCE ROBOT

Several of the project’s technologies, AmiCare, Amicare Fridge, Smartband, Smart app and Backend, will be present at the event. However, Robotnik’s RB1-Base will undoubtedly be the main star of the stand. RB1-Base is a robot designed to assist patients who require isolation. It has autonomous navigation, videoconferencing capabilities, a touch screen and the capacity for transporting tools or medicines.

Projects such as the one developed by CETEM are undoubtedly a new path for the furniture cluster in Murcia. This cluster, as a result of its high level of adaptation and specialisation, will be able to take on these technologies in order to offer an integrated, cutting-edge product with high added value. In short, from 24 to 27 May, innovation and development will come together at the FMY. It will be an opportunity of sharing the sector’s latest developments, fostering alliances and creating new business opportunities.