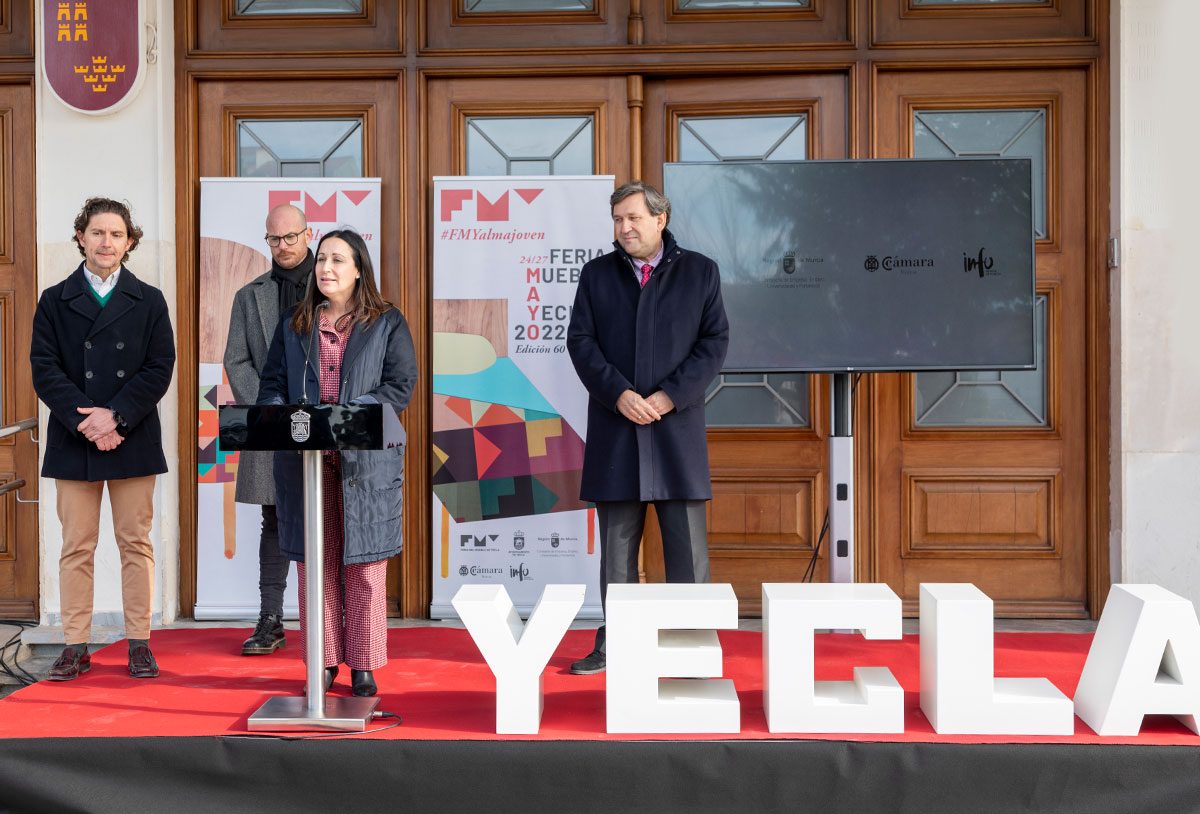 ‘Young soul’ is the motto of the 60th edition of the Yecla Furniture Fair, which takes place from 24 to 27 May and once again highlights the value of the habitat sector.

February 15, 2022.- Yecla Furniture Fair (FMY) presented on Tuesday the poster of what will be the 60th edition. The poster was designed by the Yecla designer Azorín. The fair’s slogan is ‘Young Soul’ and it will be held from 24 to 27 May.

The presentation was attended by the president of the executive committee of the FMY and mayoress of Yecla, Remedios Lajara; the general director of Trade and Business Innovation, Miguel Ángel Martín; the director of the fair, Juan Miguel Zornoza; and the designer of the new image, Jose Azorín (https://joseazorin.com/), accompanied by representatives of the municipal corporation.

The image of this 60th edition is inspired in a playful, fun and highly colourful look in the construction of representative pieces of furniture. The designer has created a series of collages with a certain retro and naïf touch, combining textures, graphics and organic strokes with patterns made from the fair’s own brand identity. A design that offers a result based on simplicity and synthesis, yet with a lot of personality, graphic power and identity.

For this edition, a series of poster designs have been created in order to showcase the diversity of the sector and enhance the graphic identity. “Four concepts, four formats, four sectors that identify the Furniture Fair: rest, furniture, habitat and upholstery, among others. A sample of the diversity of industries that will participate in a new edition of the Yecla Furniture Fair to be held from 24 to 27 May,” said Remedios Lajara, president of the executive committee of the FMY.

The success of this event is connected to this great cluster of the sector: interconnected companies, clients and institutions, alliances, trade associations and a large number of strategic agents in the sector. “Our sole objective is that the Yecla Furniture Fair will once again be a resounding success thanks to the involvement of our companies, our professionals and the public administration. In short, all the furniture professionals who last year managed to attract more than 7,000 professionals to this event,” explained Lajara.

The FMY is supported by the Regional Government every year to continue positioning the furniture, timber and related sectors.  During his speech, the Director General of Trade and Business Innovation, Miguel Angel Martin, stressed that “from the Regional Government we aim to position the Region of Murcia as a region of trade fairs in its category.

“The Yecla Furniture Fair is an example of this reality. The fair is celebrating its sixtieth edition this year. The event highlights the value of the regional furniture industry and allows the indirect economic development of commerce, the hotel and catering industry and the service sector in general. Creating opportunities for the Region of Murcia to be taken into account by organisers and exhibitors as an ideal place to attend international trade fairs is one of the objectives set by the Directorate General for Trade and Business Innovation”.

In this 60th edition, the FMY “will once again be a meeting place for innovation, design, creativity, internationalisation and, of course, the quality and professionalism of the sector”, said the director of the FMY, Juan Miguel Zornoza. He also stressed that “the image and the slogan represent the freshness of talent and new trends, together with the experience and wisdom of the sector”.

In addition, this year’s fair is still celebrating its birthday because it is 60 years since the first officially recognised exhibition was held.  In 1962, under the name ‘Provincial Furniture and Related Industries Fair’, a total of 24 firms participated with 43 stands in a space of 700 m2. A milestone that is today endorsed with the data and the dimension that this initiative carried out by the pioneers has reached.

The figures continue to show an improving sector. Exports from the Region have been strengthened in 2021 with a growth of 22% compared to the previous year. Thus, sales abroad increased by nearly 30% between January and November according to sources from the Autonomous Community of the Region of Murcia.

In short, the event comes with more soul than ever after the success of the last edition, which beat all its historical records with more than 7,000 professionals visiting the show. One of the new features was the launch of the leisure-business space, as well as the virtual platform promoted by the Instituto de Fomento (INFO), to facilitate meetings and interviews with importer clients from the Ivory Coast, Senegal, Morocco and Qatar, as well as Belgium and the Netherlands, among others. The presence of more than 80 exhibiting firms demonstrated the strength of the habitat sector that characterises this event.