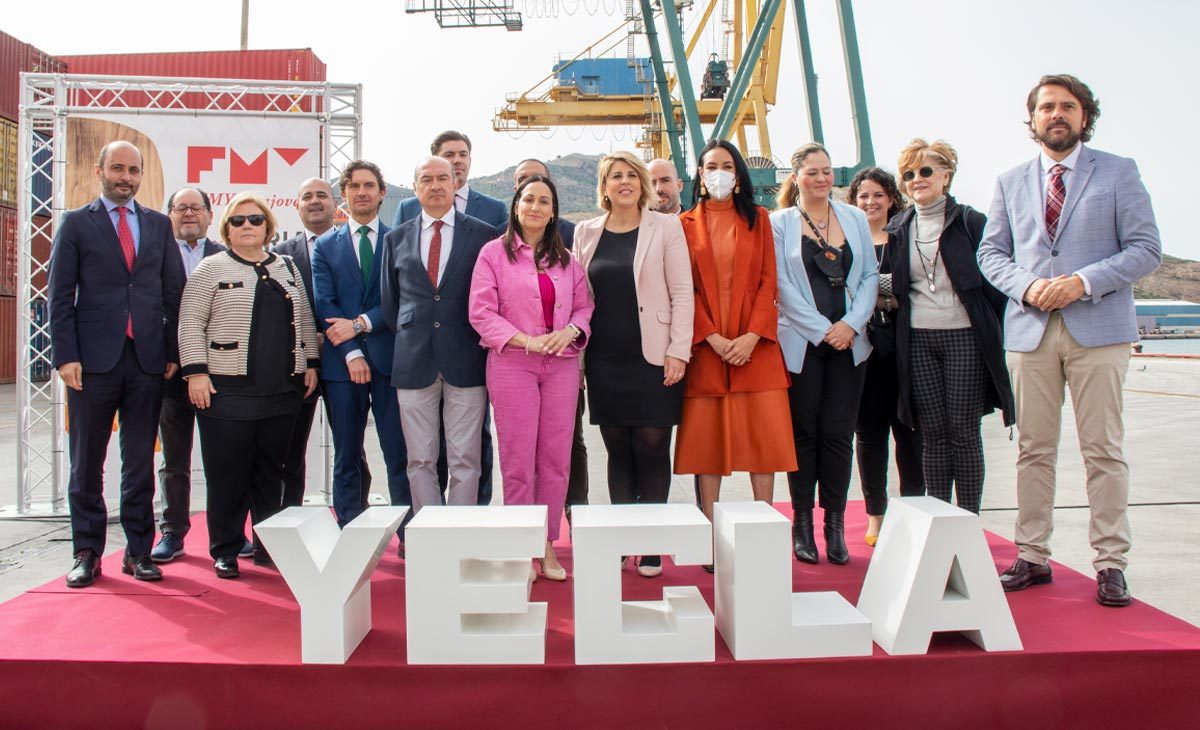 The fair’s 60th edition, presented in Cartagena, focuses on contract, internationalisation, wine tourism and craftsmanship within the Region.

The port of Cartagena hosted the official presentation of the 60th edition of the Yecla Furniture Fair (FMY). Remedios Lajara, president of the executive committee of the FMY and mayoress of Yecla, María del Valle Miguélez, councillor for Enterprise, Employment, Universities and Spokesperson, and Noelia Arroyo, mayoress of Cartagena, have been in charge of presenting this new edition. This edition returns with a “younger soul than ever”. Juan Miguel Zornoza, director of the FMY, and Fermín Rol Rol, general director of the Port Authority, also attended the presentation.

The fair’s management has chosen the port city as a key strategic location as it is known for its exports and innovation, as well as for setting up some of the most important industries and business alliances in the Region of Murcia. In this sense, Remedios Lajara, explained that: “this port scenario represents a constant need to establish new alliances, making the most of the infrastructures available in the Region”.

Cartagena is a magnet not only for tourism, but also for business and trade. Lajara said that it is very important when it comes to developing new export channels in addition to those already existing for the furniture sector. It also allows us to achieve new objectives, promoting competitiveness within the companies of the furniture cluster export framework.

Cartagena’s mayoress, Noelia Arroyo, highlighted the port of Cartagena’s commercial role and encouraged companies from Murcia to take advantage of our port’s proximity to use the transport system that best suits their needs to increase their competitiveness. “We represent an important doorway for the Region’s products, and we are counting on Yecla’s innovative and developing furniture sector on this journey”.

This 60th edition of the event will be held from 24 to 27 May. It is the longest-running furniture fair in Spain and is expected to host more than 80 exhibiting companies and thousands of professionals from the sector. In addition, for the first time this year, the CreAcción festival will be held simultaneously. “This is an event that showcases the talent, creativity, innovation and potential of Yecla’s artists, which is then transferred to the industry. In short, we are trying to add up. To add and contribute to the character of a city like Yecla, which reinvents and adapts itself, demonstrating its determination and entrepreneurial capacity”, stated Remedios Lajara.

In 2021, furniture sector exports in the Region reached the historical figure of 105.7 million euros, with a sales growth of 26.7%. This figure shows the professionalism and quality of the regional furniture cluster, highly sought after by some of the world’s most important specifiers to develop their emerging projects for hotels, hostels, restaurants, embassies, cruise ships, villas, hospitals and banks, among others.

The councillor María del Valle Miguélez stressed that, in this 60th edition, FMY’s internationalisation will be promoted with reverse trade missions, both virtual and face-to-face. These missions will once again be supported by the Instituto de Fomento (INFO). “This year, we will continue maintaining our objectives in European countries. We will also focus on African markets that are experiencing an increase in their imports”, added the councillor, who also highlighted their commitment to this event. “We will keep on supporting the Fair and the important sector it serves as a showcase for. In total, we are allocating 70,000 euros to this event, of which 50,000 are provided by the Instituto de Fomento and 20,000 by the Directorate General for Trade and Business Innovation”, she added.

Juan Miguel Zornoza, fair’s director, acknowledged the FMY’s institutional support and alliances. “It is essential to have the support of all the administrations and all the agents in the sector to achieve the best possible fair, which we can consider the main event for the habitat sector in the Region”. He also stressed that this new edition “is presented with optimism, in spite of the current economic situation”.

The alliances that Zornoza referred to, which have been forged over the 60 editions of the event, were present in Cartagena today. This is the case of AREMA; the Technological Centre of Furniture and Wood (CETEM); the Open Centre for Architecture (COAC); the CODID-RM; the Chamber of Commerce of Murcia and Cartagena; the Spanish Institute for Foreign Trade (ICEX) or COEC, among others.

During this edition, FMY will present yecla’s wine tourism offer with guided tastings of DO Yecla wines. The region’s craft industry will also be present at the FMY. The Directorate General for Consumer Affairs and Crafts is seeking to introduce and promote the craft sector in decoration and home shops, both regionally, nationally and internationally.