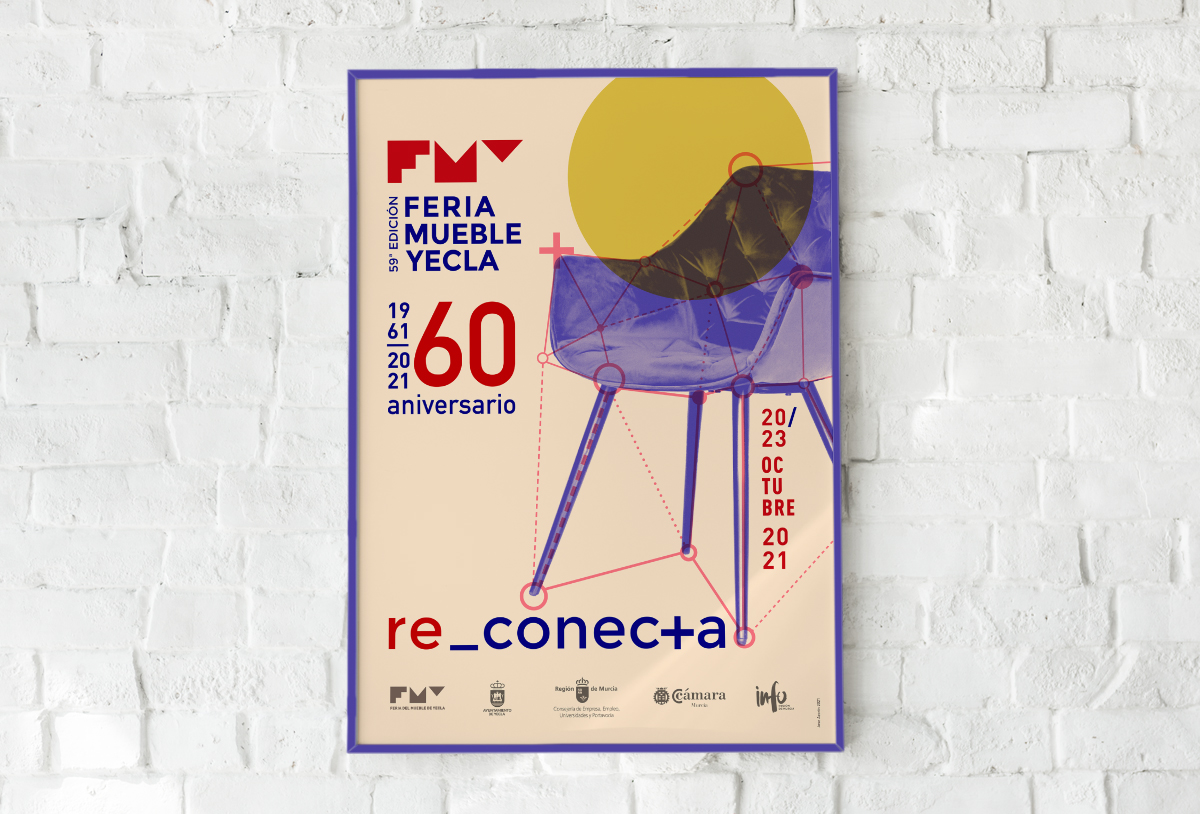 New convivial spaces and reconnection with furniture and related industries, to be protagonists at the 59th edition of the FMY

This year’s edition, entitled ‘re_connec+’, will be held from 20 to 23 October

July 27, 2021.- The 59th edition poster of Yecla Furniture Fair (FMY), which is coming back more ‘re_connec+ed’ than ever, and celebrating its 60th anniversary as part of furniture and related industries, was presented this morning at the Department of Enterprise, Employment, Universities and Spokesmanship. The event was attended by the Regional Minister María del Valle Miguélez, María Remedios Lajara Domínguez, president of the FMY executive committee and mayoress of Yecla; and Jose Azorín (https://joseazorin.com/), graphic designer of FMY poster.

The 59th edition in 2020 could not be held due to the pandemic, and now in 2021 the event is committed to ‘re_connec+’ with the great family of all companies dedicated to this sector. For this reason, this year’s programme seeks to generate spaces for communication, meetings and dialogues that, beyond their business nature, foster an ecosystem where relationships between professionals become more human and personal.

In fact, the poster, designed by Jose Azorín, develops this concept of “reconnecting”, “of re-establishing physical communication after all these months of isolation”, as he himself explained, an idea that is very present in this new edition of the fair, which celebrates its 60th anniversary (1961-2021) as a national benchmark for the furniture and wood sector.

“That is why I have worked with elements that lead us to a network of connections, the neuronal as a connection between the different types of communication and relationships between elements, but with the intention that this serves to build a larger, consolidated structure,” says the poster author.

All the elements used by Azorín “are superimposed on a background of furniture pieces on which I wanted to focus in terms of form and movement. Also, as part of the strategy of consolidating a graphic language, I have chosen a very specific colour palette based on basic colours,” he adds.

“Redefining meeting points, synergies and relationships between individuals”, as Azorín explained, will be a key element in this 59th edition, which will take place from 20 to 23 October under the slogan ‘re_connec+’. A concept that refers both to the origin of the fair as a home, to belonging to a community with its own identity, but also as a commitment to complete digitalisation and current needs such as innovation and technology.

As a matter of fact, furniture sector has been, for decades, the industrial cluster that makes it the second largest industry in the Region of Murcia in terms of employment generation. In this respect, the Regional Minister for Enterprise, Employment, Universities and Spokesperson, María del Valle Miguélez, who presented this new edition together with the Mayoress of Yecla, Remedios Lajara, highlighted “the strength of furniture manufacturing and design sector”. “It is, as the slogan of this year’s fair says, the moment of social ‘reconnection’ with one of the most nationally and internationally renowned business events in our region,” she added.

Statistics confirm the regional importance of wood and furniture sector, an industry that brings together more than 1,127 companies and generates more than 7,700 direct jobs in the Region of Murcia, that is, 11 percent of regional industrial employment. “This is a sector that has relied on quality and design as its best weapons to position itself in an internationally privileged place”, the Regional Minister emphasised.

Still on the subject of statistics, Miguélez also mentioned that furniture exports from Murcia have grown “non-stop in recent years and even in pandemic times”. In 2020, exports reached 80.3 million euros, two per cent more than in 2019, whose figures (78.7 million euros in sales) were already almost 10 million euros higher than those of 2018, which were 69.4 million euros. Exports in this industry of the Region of Murcia account for five percent of total exports, making it the eighth Spanish province in terms of furniture exports in 2020.

‘Virtual Fair’, ‘Visits to companies’ and ‘Leisure-Business’ area to be this year’s highlights

As for the mayoress of Yecla and president of the executive committee of FMY, Remedios Lajara, she underlined in her speech “the impressive effort” made by companies, entrepreneurs and workers “to make it possible for the sector to be able to hold this fair”.

“The Furniture Fair has been and should still be the great showcase of local economy,” said Lajara, who pointed out that efforts should be made “to maintain and enhance this showcase from which Yecla and the Region of Murcia benefit, which has the work of the Autonomous Community and the Institute for the Promotion (INFO) so that internationalisation becomes one of the main backbones”.

The president of FMY’s executive committee unveiled some of this year’s new features, such as the ‘Virtual Fair’, a new space where the fair is committed to digitalisation and to giving value to the virtual world, which is now more a thing of the present than of the future.

For the first time, customers will be able to take a virtual tour of the exhibiting companies. The aim is to enhance this sector visibility in different countries through all the tools we have at hand.

Likewise, parallel activities outside the physical space of the fair will also take centre stage at this year’s edition. This is the case of ‘Visits to companies’, in which manufacturing knowledge regarding this sector products will be promoted.

One of the most important areas for professionals attending the fair will be the ‘Leisure-Business’ area, a new concept of relational networking in which participants will be able to establish professional links in a closer and more relaxed way, while listening to live music at the same time.

On the other hand, thanks to the work carried out by the Institute for the Promotion of the Region of Murcia (INFO), internationalisation has become one of the main points. We are working on a European face-to-face reverse trade mission that will be supported through the different INFO’s Offices for the Foreign Promotion Network (OPEX) and a sector’s internationalisation agency.

Finally, the trade fair institution has insisted that the celebration of this 59th edition will respect all measures adopted by health institutions at all times.