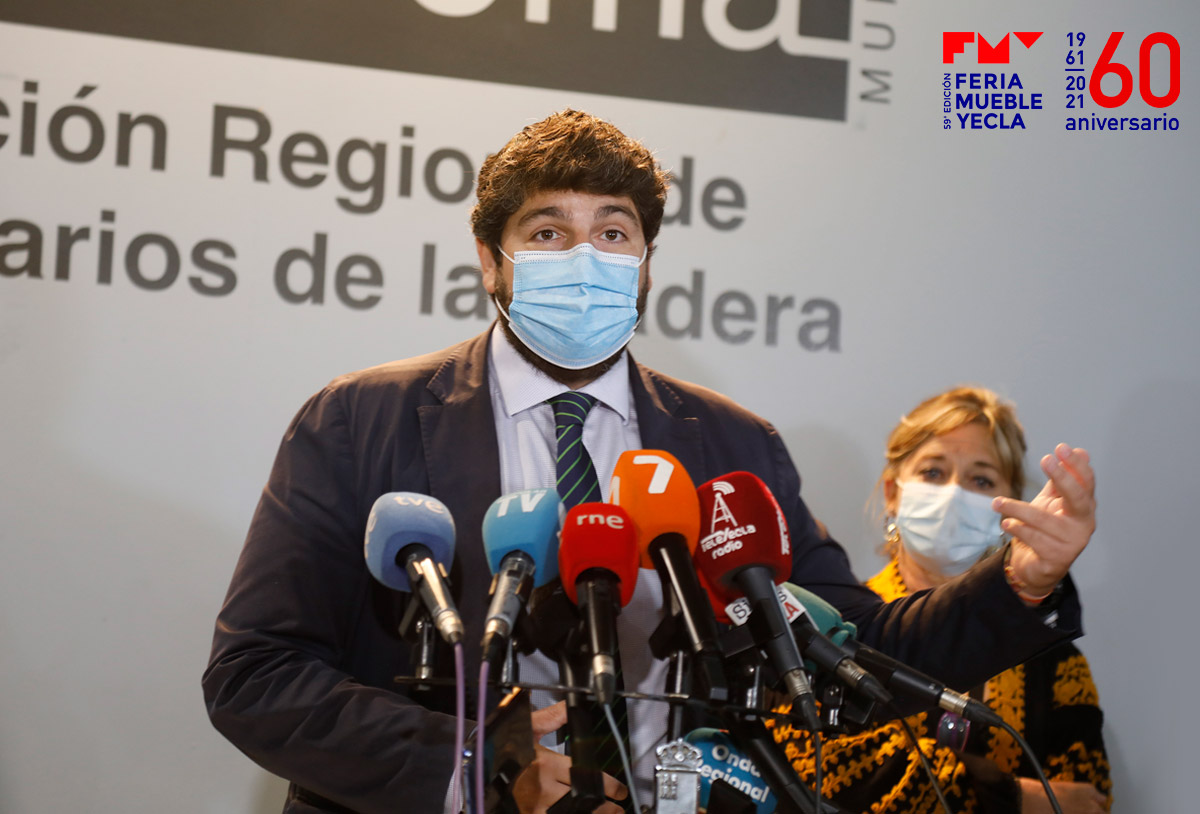 20 Oct More than 6.000 proffesionals will attend the 59th edition of the fair

The Yecla Furniture Fair returns to its face-to-face modality with the highest number of registered professionals in its history.

The ‘reconnection’ edition kicks off in Yecla in its 60th anniversary year with a full venue, more than 80 firms and the presence of the regional president,

Wednesday, 20 October 2021- The 59th edition of the Yecla Furniture Fair (FMY) kicked off this Wednesday with the president of the Autonomous Community of the Region of Murcia, Fernando López Miras, officially opening the fair. He was accompanied by the director of the fair, Patricia Cuadrillero, and the president of the Executive Committee of the fair and mayoress of Yecla, Remedios Lajara, along with most of the municipal body.

The official inauguration took place at around 10:00 a.m., after a previous contact with the media by Patricia Cuadrillero. The director of the FMY highlighted that this was a very special edition, the fair celebrated its 60th anniversary and they wanted to reconnect, they were very grateful because they had broken the records of registered professionals.

Specifically, more than 6,000 professionals have signed up for the 59th edition, including practitioners, commercial agents and representatives of the sector, an all-time record of participation. Regarding the good reception of the ‘reconnection’ of the event, the director of the FMY has stated that a very important effort has been made to set off this event, as the last one could not be held due to the health situation. “From the furniture fair we are aware of the importance of reconnecting to maintain and expand business contacts of the great furniture cluster, where face to face contact is important,” she said.

Cuadrillero also highlighted the sector’s excellent work related to customer service. They work to offer to the costumers everything they need and take the utmost care of their needs. “From the FMY we work to meet the needs of our customers and promote the furniture cluster through comprehensive projects, retail and large furnishings,” said the director of the FMY, Patricia Cuadrillero.

Fernando López Miras, the regional president, said that perhaps this was the most important edition of the Yecla Furniture Fair, recalling how important it is, after a year and a half, “to reconnect with customers and exhibitors.” He also stated that the furniture sector is essential for the Region of Murcia, with more than 1,100 companies, most of them located near Yecla, which generate more than 7,000 direct jobs and accounts for 11% of the GDP of the Region of Murcia.

“It is a sector that has responded to the difficulties and has helped the Region of Murcia, the sector has increased its sales and even its exports by 2% with a turnover of more than 80 million euros,” said the regional president, who highlighted that in a year as difficult as 2020, marked by the pandemic, “they have generated new jobs,” he stated.

Finally, on behalf of the companies that create the family of furniture, wood and related products, Lopez Miras said that they made the name of the Region of Murcia travel halfway around the world, along with a quality product, technology and design, so it has pledged to continue promoting it. “So far, this year more than 50 companies in the sector have received more than 4 million euros from INFO,” he declared.

On the other hand, Remedios Lajara, president of the Executive Committee of the FMY and mayoress of Yecla, stressed that the industry and the people of Yecla had spent a year working very hard, very constantly and with a great commitment on the part of everyone and that this was now bearing fruit with this record number of visitors for the 59th edition. “Today we raise the curtain on this great showcase for the Yecla economy, which is our furniture fair,” he declared.

She added that it had been sixty years since some dreamers believed in a project that has benefited Yecla during these six decades. “They dreamed, and we have the duty to update an event that, due to the uniqueness of our municipality and the large concentration of furniture industries that we have, makes it unique in Europe,” she said.

There are three intense days awaiting in which the country’s leading firms will present the new trends in the sector and the novelties that will flood the market in the coming months. There will be, without a doubt, novelties that place value on sustainability and design, in a clear commitment to spaces with soul, care for the planet and the circular economy.

NEW SPACES FOR COEXISTENCE AND INTERNATIONALISATION

Undoubtedly, the 59th edition of the trade fair is also the one of new places of coexistence, both physical and virtual. The concept of dwelling, which is the at the core of the event, will be very present in the ‘Leisure-Business’ space, a new location designed so that commercial agents, practitioners and visitors can establish professional ties in a closer and more relaxed way.

To create this serene atmosphere, the fair organisers have arranged a series of concerts to make music the soundtrack of this space designed ad hoc for the 59th edition. The first of these takes place today, Wednesday, at 11:00 a.m., with Javier Soriano Lorenzo on the piano.

And, although face-to-face contact has been the hallmark of this event, these spaces of coexistence are expanded this year with the virtual platform, through which countries such as Ivory Coast, Senegal, Morocco and Qatar will look at the showcase of furniture Murcia has to offer thanks to the Instituto de Fomento de la Región de Murcia (INFO). Representatives from Portugal and Cyprus, two markets that have been selected for their potential, will be visiting the fair from the European continent, and Belgium and the Netherlands will also be participating virtually.

The agenda for this first day of the fair will include other events such as the jury’s visit to the fair’s stands to choose the ‘Best Stand FMY 2021’ (at 01.00 p.m.); the Round Table ‘III Spaces with senses’ (04:30 p.m., Multipurpose Hall), conducted by Miguel Ángel Rubio, with the participation of members of the Colegio Oficial Diseñadores Interior/Decoradores de la Región de Murcia (CODID-RM); the Dire Straits tribute concert by The Lady Writers (05:00 p.m., Leisure/Business Space); and the awards ceremony for the ‘Best Stand FMY 2021’ (06:00 p.m., INFO Stand E19-F17).