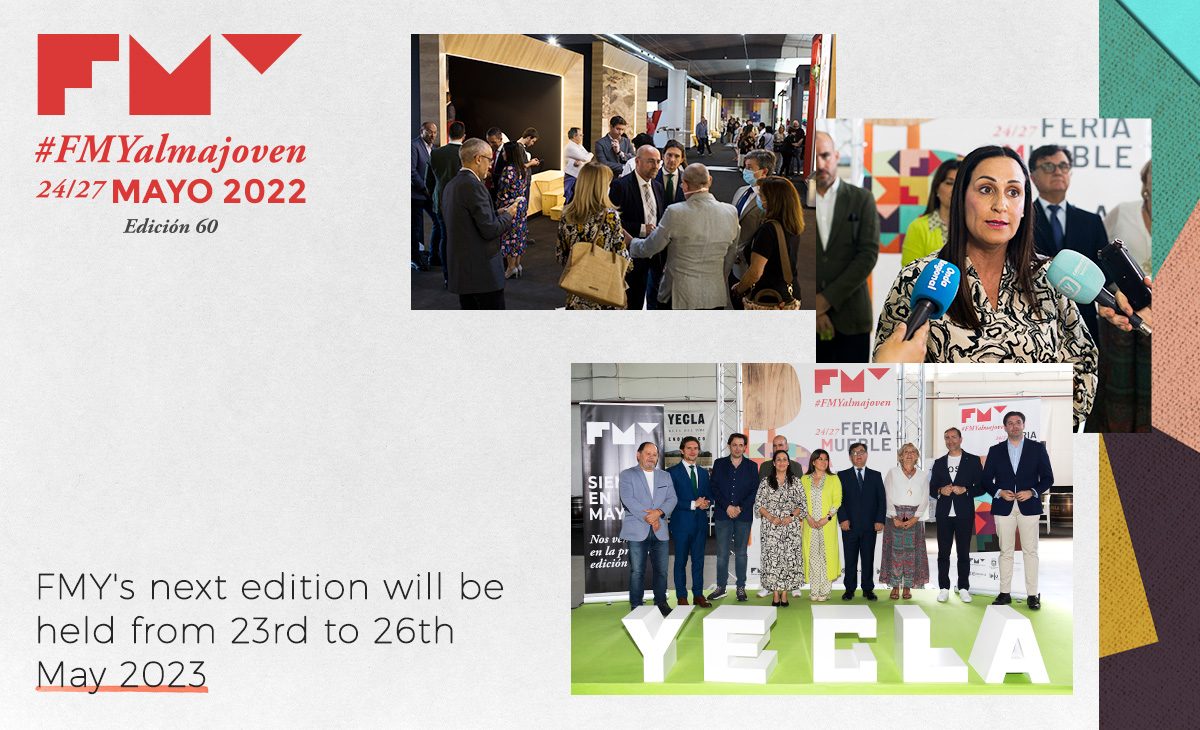 This 60th edition was attended by a total of 2,687 professionals from the housing sector who came to see the latest developments from the exhibiting companies.

The 60th edition was officially concluded last Friday by Remedios Lajara, Yecla Furniture Fair (FMY) Executive Committee President and Yecla Mayoress. She also announced next edition’s dates, which will take place from 23rd to 26th May.

This edition’s ‘Young Soul’ has reflected our exhibitor firms’ prominence as well as a large cluster’s resilience. A cluster that has combined strength and encouragement in these difficult economic times. Housing value and research, development and technological innovation continue to be the way forward for this event.

Remedios Lajara wanted to express her gratitude to every organisation and alliance involved in the fair for their work and support to ensure that the 60th edition of the fair took place. “We knew that it was a risky decision to celebrate the event only seven months after the 59th edition was held, but we had to recover our date, the month of May”.

FMY has been and will continue to be an unmissable event in the Spanish trade fair calendar for the sector. “We would like to highlight that thanks to an exhaustive visitor access control system, we know that those 2,687 professionals have translated into a total of 3,313 visits during four days of the event”, said Juan Miguel Zornoza, FMY director, who also wanted to point out that “FMY is a reflection of the sector’s situation in each of its editions. This year, the event’s progress has been affected by war, increasing commodity prices and inflation, among other factors. These have caused uncertainty among both buyers and sellers”.

Sector projection beyond our borders

During this 60th edition, FMY, supported by the Instituto de Fomento (INFO), focused on attracting new clients. This was possible thanks to the presence of buyers and specifiers from North Africa, within a face-to-face reverse trade mission, who had the opportunity to visit manufacturers’ facilities in which they were interested.

Such proximity to North Africa, Morocco and Algeria, together with Egypt’s interesting market, offers considerable advantages in terms of distance, reduced transport costs and a population that is interested in European furniture. In this sense, the Foreign Network Office in Algiers submitted a list of very specific orders for clients in that country, which will increase furniture sales in that area. Besides, Egypt’s delegation presence showed that this country is an important opportunity point for furniture from the Region of Murcia. The number and value of construction projects, such as the Administrative Capital for Urban Development and Noor City, proved that this country is an excellent place for furniture from the Region of Murcia.

To sum up, some 70 face-to-face meetings were held between importers and regional exhibitor firms, and around ten business deals were struck at the fair itself. In addition, companies have consolidated interesting pre-agreements for strategic projects in the contract sector.

Apart from North African delegations, FMY and INFO have launched, for the second year running, FMY’s virtual platform (https://mueble.infointernational.es/), where 34 manufacturers, seven of which participated with 360º reproductions of their factory displays, showcase their products and services.

Over the next two months, exhibiting companies that took part in FMY 60th edition will use the platform to hold virtual meetings with customers in European markets, such as Belgium, United Kingdom, France, Germany and Italy, as well as those referred to in North Africa. The platform will remain open for the next two months in order to maximise market opportunities.

If anything distinguished FMY’s 60th edition, it was its relational character and forging synergies, such as the Creacción Festival and Yecla Wine Route, as well as strengthening those already maintained with the Furniture and Timber Technology Centre of the Region of Murcia (CETEM), the Official Association of Commercial Agents (COAC) and the Regional Association of Timber Entrepreneurs (AREMA). And of course, regional and local government support for the promotion of this event.

‘Creacción’ offered our visitors an opportunity to get closer to emerging art, with concerts and exhibitions, as well as interesting discussions on housing design trends or design during the COVID period and its influence in the coming years. However, there is no doubt that the greatest experience for our senses came from Yecla Wine Route, with its wine tastings and pairings.

These synergies and the companies’ spirit within the sector help us to reinvent and position ourselves as the epicentre of the housing sector. “FMY knows no limits and, in the future, it will be whatever Yecla’s people want it to be, given its working skills and philosophy”, underlined FMY’s Executive Committee President at the official conclusion of the event.

CETEM’s presence has been a major attraction at our housing fair. Firstly, by exhibiting advanced technologies at its stand that will promote better living and ageing. But, above all, with the ‘eHealth Home – a new platform of active and healthy ageing’ round table, which took place on the last day of the fair, and which defended the use of these emerging technologies in favour of active and healthy ageing.

Another of the event’s most consolidated synergies is the one it maintains with COAC. It celebrated its ‘Commercial Agent’s Day’, which took place on FMY’s second day. It also awarded the Arema Annual Award to the Instituto de Fomento de la Región de Murcia (INFO), for their support, impulse and international projection to the furniture, timber and related industries sector.

The Yecla Furniture Fair (FMY) Executive Committee would like to express its gratitude to all those involved in the sector for the organisation of this event. “After thanking everyone, it is time to think about what the next steps of this event should be, to study the results of this edition in detail and to establish a strategic direction to ensure FMY’s success”, said Juan Miguel Zornoza, FMY’s director.