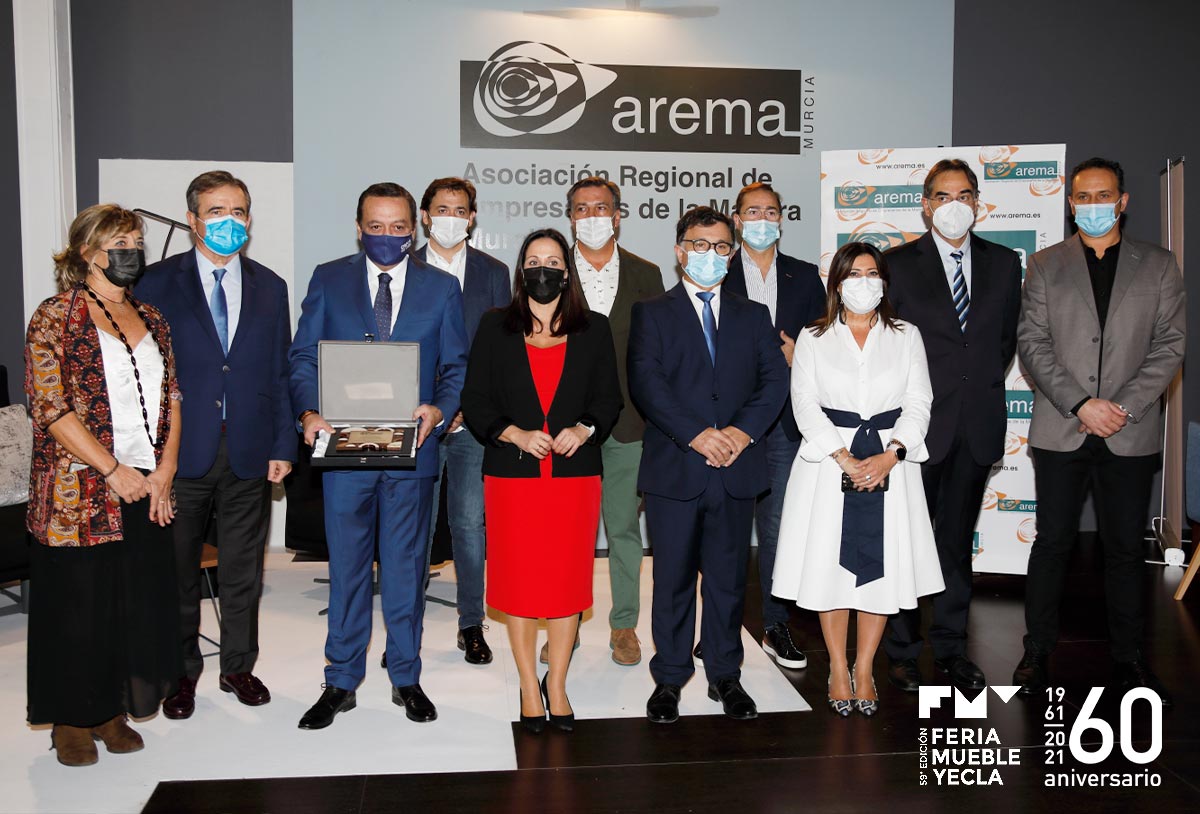 October 22nd, 2021 – The third day of the Yecla Furniture Fair (FMY) 59th edition has shown the prestige of the Murcian furniture all over the world. Thanks to the two reverse trade missions that are being carried out during the FMY, more than 80 exhibiting companies are showing their products and services in person and virtually, in the European, Asian and African markets.

Ivory Coast, Senegal, Morocco and Qatar have been the non-EU countries chosen in the internationalisation strategy that FMY is working on, together with the Instituto de Fomento (INFO) of the Region of Murcia. In this way, through a virtual reverse trade mission to connect prescribers and companies, “we have foreseen that more than 150 job interviews will take place,” the director of INFO, Joaquín Gómez, says. Over the next week, 40 interviews with Senegal are already planned. The platform will remain active until 20 November to encourage the expansion of our brands and generate new transactions. In the virtual platform, interested parties can visit the website of the FMY, through the Virtual Platform link ( https://mueble.infointernational.es/).

The data recorded so far reveal the impact of the virtual platform, which has received around 600 visits with an average time of 20 minutes, from countries where the trade mission is taking place, as well as others such as China, Colombia, Austria, Holland, Portugal, France and Germany.

In addition, a Portuguese and Cypriot delegation have been visiting the fair personally since yesterday, while professionals from Belgium and the Netherlands have also joined this mission, via the virtual platform.

In an industry like ours, which generates 8,000 jobs, talent is needed, a talent that “we find in companies, institutions, services and all those who work for the furniture industry continues to grow,” said José Antonio Ortega, president of AREMA, during the ceremony of the annual award that makes the association, and this year has received José María Albarracín, businessman and current president of CROEM.

Remedios Lajara, Yecla’s mayoress and Executive Committee’s president of FMY, has highlighted that “rewarding José María Albarracín is rewarding courage, professionalism and private initiative, an initiative that we need so much to improve as a society”. Lajara also underlined the Yecla cluster’s strength. In addition, he has recognized and congratulated AREMA and their directors, especially Patricia Cuadrillero, by the work being done from the association and, above all, from the presidency of the Yecla Furniture Fair.

The businessman and CROEM president, José María Albarracín, said that “it is a satisfaction to receive this award” and that has also rewarded the work being done from the regional employers, satisfaction that has said, “is even greater because this recognition comes from employers, those who work by and for the company.

This evening at 18:30 in the leisure-business area, the FMY will host an honour toast to celebrate its 60th anniversary and the closing ceremony will take place. Tomorrow, however, the FMY will be open to the general public. Remedios Lajara, FMYY’s Executive Committee President and Yecla’s Mayoress will be the one who will give voice to this toast, to which the relatives of the first exhibitors of the 1961 event have been invited.

This emotional toast will be surrounded by the magical music with Classical Jazz Projetc, and by the “Infinite Beauty” of Monte Arabí’s exhibition, by José Luis Navarro the photographer.

In addition, throughout the event, the CETEM also offered two activities that attracted our visitors’ attention. Firstly, its ‘Remix TAT’, in which attendees were able to discover the Mixed Reality experience. Likewise, under the name of ‘CETEM Design Award’, the technology centre showed the winning International Design Competition prototypes that it organises every year.

As part of the FMY’s programme, it continues to focus on giving visibility to the exhibitor companies. For this reason, there is an information display on the stands in the exhibition centre that identifies those companies from which visitors can request a visit to the factories directly from the stand, something that can still be done this Saturday, the event’s last day.

Tomorrow, Saturday 23rd October, from 10:00 to 13:30, the public will be able to visit and reconnect with this event, which is part of the idiosyncrasy of the Region of Murcia and a driving force for the regional economy.